Irradiation of flat solid surface by swift heavy ions can result in the formation of nanoscale surface features like hillocks or craters. These remnants of ion impacts called ion tracks can be observed directly using atomic force microscopy (AFM). Within the research unit Ion Beam Physics and Technology, we have demonstrated in two recently published papers that swift heavy ion beams are versatile tool for nanostructuring graphene and GaN. 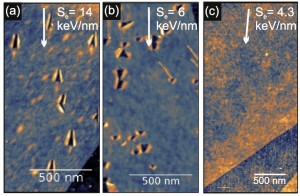 In the work “Nanostructuring graphene by dense electronic excitation”, published in Nanotechnology (journal IF = 3.821) we reported detailed investigation of graphene response to the swift heavy ion irradiation in a wide range of energies. It was demonstrated that medium scale accelerator facilities like the one at the RBI can be used successfully for nanostructuring graphene (Figure 1.). By choosing appropriate ion beam irradiation parameters, not only graphene can be pierced, thus producing nanoscale pores within it, but also different kind of defects can be introduced into it in a controlled manner. The study was done in a collaboration with scientists from Germany (Universities Duisburg-Essen, Ulm and Jena), France (GANIL ion accelerator facility in Caen) and RBI (M. Karlušić, M. Jakšić).

In the work “Response of the GaN to energetic ion irradiation: conditions for ion track formation” published in J. Phys. D: Appl. Phys. (journal IF = 2.721) and featured on the journal cover page, we reported results of our investigations regarding swift heavy ion irradiation of wurzite GaN surface, and showed for the first time that grazing incidence small angle X-ray scattering (GISAXS) can be utilized for analysis of such irradiated surface (Figure 2.). 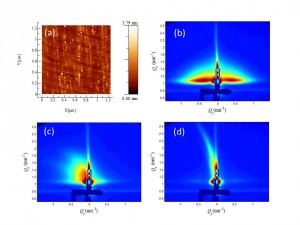 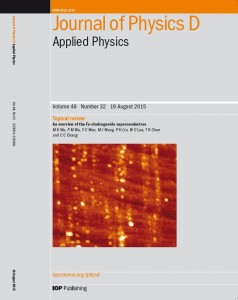 In contrast to previous works where nanohillocks were found within the surface ion track, morphology of 92 MeV Xe ion tracks consist of both nanohillocks and nanoholes. For lower energy irradiation using 23 MeV I, ion tracks consist only of nanoholes. In addition, TOF-ERDA measurements showed significant loss of nitrogen during irradiation and opens up the question of the composition of ion tracks. The study was done by the team of scientists from the RBI ion accelerator facility (M. Karlušić, M. Buljan, Z. Siketić, M. Jakšić, B. Šantić), in collaboration with colleagues from GANIL ion accelerator facility (Caen, France), HZDR (Dresden, Germany), Elettra synchrotron (Trieste, Italy) and Universities Duisburg-Essen and Ulm (Germany).