Sadržaj nije dostupan na hrvatskom For the sake of viewer convenience, the content is shown below in the alternative language. You may click the link to switch the active language.

Epitaxial graphene, considered by many as the best source of graphene for various technological applications, contains various type of defects which deteriorate its intrinsic, superior properties. The prominent defects are graphene wrinkles which are the subject of our work published in Carbon (journal IF = 6.196) this July [Carbon 94 (2015) 856-863] by M. Petrović (Institute of Physics), J.T. Sadowski (CFN BNL, USA), together with A. Šiber and M. Kralj from CEMS/G2D.

Some of the main characteristics of epitaxial graphene on metal substrates are its uniformity and high structural quality. However, due to the high synthesis temperatures and practically negligible coefficient of thermal expansion of graphene, cooling to room temperature induces stress in graphene layer. The stress is relaxed in the form of wrinkles which represent deformations of the otherwise planar graphene lattice and as such affect many properties of graphene, e.g. electrical and thermal conductivity, optical transmittance and chemical reactivity. In addition, wrinkles play a major role in graphene intercalation which is often utilized for the creation of hybrid graphene systems. Therefore, a thorough understanding of graphene wrinkles is important for potential applications of graphene. 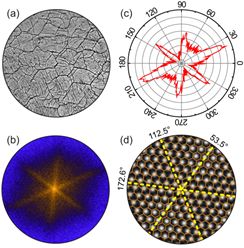 (a) LEEM image of graphene’s wrinkle network, (b) Fourier transform of (a) exhibiting hexagonal symmetry, (c) polar plot of radial sums extracted from (b) and (d) illustration of graphene (orange) on Ir(111) (gray balls) with marked directions of wrinkle extension (yellow).

In the paper published in Carbon, micro- and nano-characterization of wrinkles of graphene synthesized on the iridium (111) surface has been performed. The low-energy electron microscopy (LEEM) and scanning tunneling microscopy (STM ) were used for experimental measurements and a simple analytic model was utilized for the understanding of the wrinkles’ energetics. It is shown that wrinkles, having lengths of the order of micrometers, interconnect in an ordered quasi-hexagonal network which is aligned with the substrate (see left figure). The network can be mathematically described with the aid of Voronoi diagrams, which significantly facilitates its parameterization. Also, a new model is proposed which accounts for the observed changes in the electron reflectivity of graphene and relates it to the local relaxation of the graphene lattice during wrinkle formation. 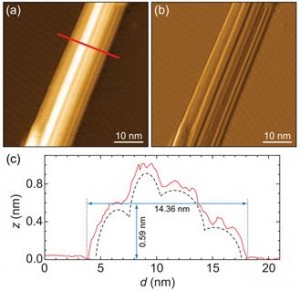 STM image of (a) topography and (b) first derivative of topography of graphene wrinkle and (c) wrinkle profile marked by red line in (a). Four lobes constituting the wrinkle can be identified.

Moreover, it is determined that structural details of graphene and iridium (e.g. dirt particles and already formed wrinkles) can act as nucleation centers for the formation of new wrinkles. At the nano-scale, individual wrinkles are composed of several lobes (see right figure) which result from the system frustration which is induced during cooldown from high synthesis temperatures. In terms of energy, the number of lobes is determined by the competition of the van der Waals binding acting between graphene and iridium and the graphene bending energy. Overall, this study provides new insights into graphene wrinkles and their network as a whole, which makes it relevant for future development of devices based on graphene as well as on other 2D materials.