5 August 2021   Encrypted audio-video communication has been established between Italy, Slovenia and Croatia with the help of quantum technology!

The first public demonstration of quantum communication between three countries: Italy, Slovenia and Croatia, was demonstrated today as a part of the G20 meeting in Trieste. It was established among Trieste, Ljubljana and Rijeka. Thanks to scientists and experts led by the Ruđer Bošković Institute (RBI) within the Croatian Quantum Communication Infrastructure Consortium (CroQCI), Croatia, although not a member of the G20, found itself alongside the richest and most influential countries. 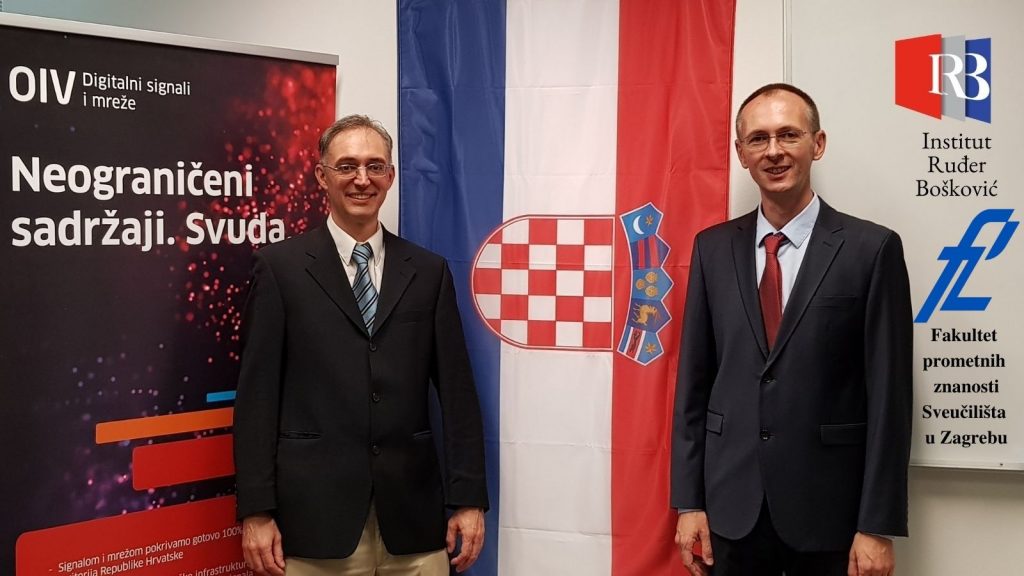 The demonstration was organized by Prof. Angelo Bassi from the Department of Physics of the University of Trieste and the Quantum Communications Group of the National Institute of Optics (CNR-INO) led by Dr. Alessandro Zavatta.

In Slovenia, the demonstration was led by Prof. Rainer Kaltenbaek and Prof. Anton Ramšak from the Faculty of Mathematics and Physics, University of Ljubljana, with the technical support of Telekom Slovenije, while in Croatia this endeavour was led by Dr. Mario Stipčević and Dr. Martin Lončarić from the Ruđer Bošković Institute with the support of colleagues from the Faculty of Transport and Traffic Sciences in Zagreb and the telecom company OIV – Digital Signals and Networks.

“The Croatian side, in addition to full quantum communication on the 100.5-kilometer-long Trieste-Rijeka route, here for the first time in the world publicly demonstrated the so-called “quantum-enhanced cryptography”, through which Rijeka is connected to Zagreb. The device that made this possible is the result of cooperation between the “PCE” Marine Electronic Center from Split and the Ruđer Bošković Institute from Zagreb. It is an intermediate step that offers security less than quantum cryptography (which is absolute), but also significantly higher than conventional crypto solutions, and at a significantly lower cost than quantum cryptography.” explained Dr. Mario Stipčević, head of the Laboratory for Photonics and Quantum Optics at the RBI and one of the coordinators of the demonstration in Croatia.

“With the successful realization of this endeavour, our scientists and experts broke the ice and paved the way for the realization of quantum infrastructure in the Republic of Croatia. This proves Croatia’s readiness to participate in the construction of a pan-European quantum communication network”, said Dr. Stipčević.

Quantum communication satisfies the need for secure communication, which is a priority of all governments around the world. This technology achieves absolute security thanks to quantum encryption that works through photon exchange, which allows instantaneous detection of hacker intrusion attempts.

“The importance of today’s demonstration is further emphasized in the context of the future European Quantum Communication Infrastructure (EuroQCI) promoted by all EU member states and the European Commission with the support of the European Space Agency. From the very beginning, Croatia has been involved in shaping EuroQCI”, explains Dr. Martin Lončarić from the RBI, who, along with Dr. Stipčević, is the coordinator of these activities in Croatia.

“Today we have laid the foundation stone for a new European quantum infrastructure,” explained Tommaso Calarco, President of the European Quantum Community Network (QCN), “with unprecedented security, which by nature belongs to us”, he concluded.

The demonstration began with official greetings from representatives of the institutions, followed by a real musical treat prepared by three music quartets. Namely, the musicians, using the quantum cryptography established to demonstrate this communication, performed specially prepared musical works in each of the three countries.

The musical performance was achieved thanks to the cooperation of the Trieste Conservatory “Giuseppe Tartini” together with the Music Academies in Ljubljana and Zagreb. 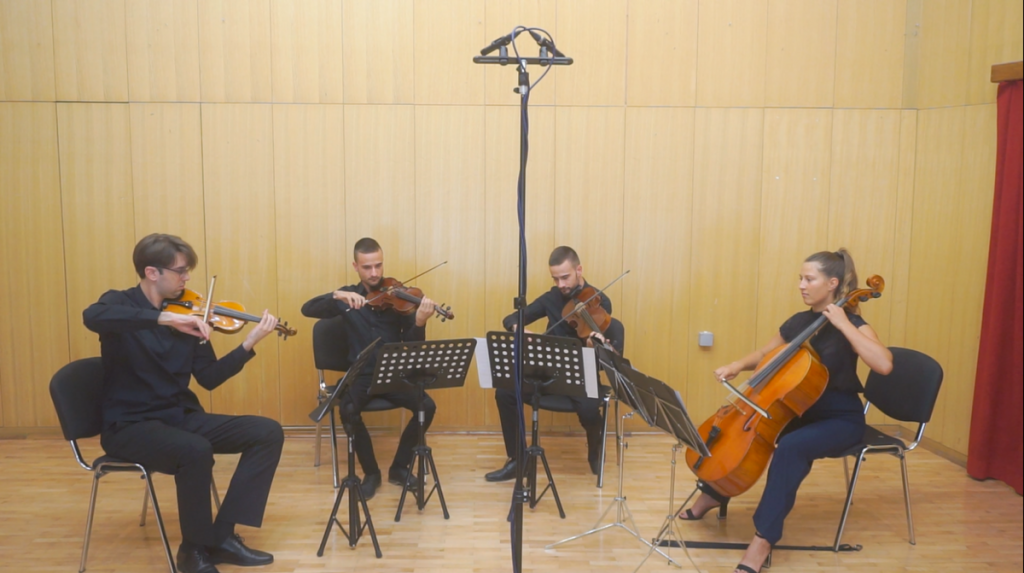 Additional information can be found here.

Sorry, this entry is only available in Croatian. For the sake of viewer convenience, the content is shown below in the alternative language. You may click the link to switch the active language. 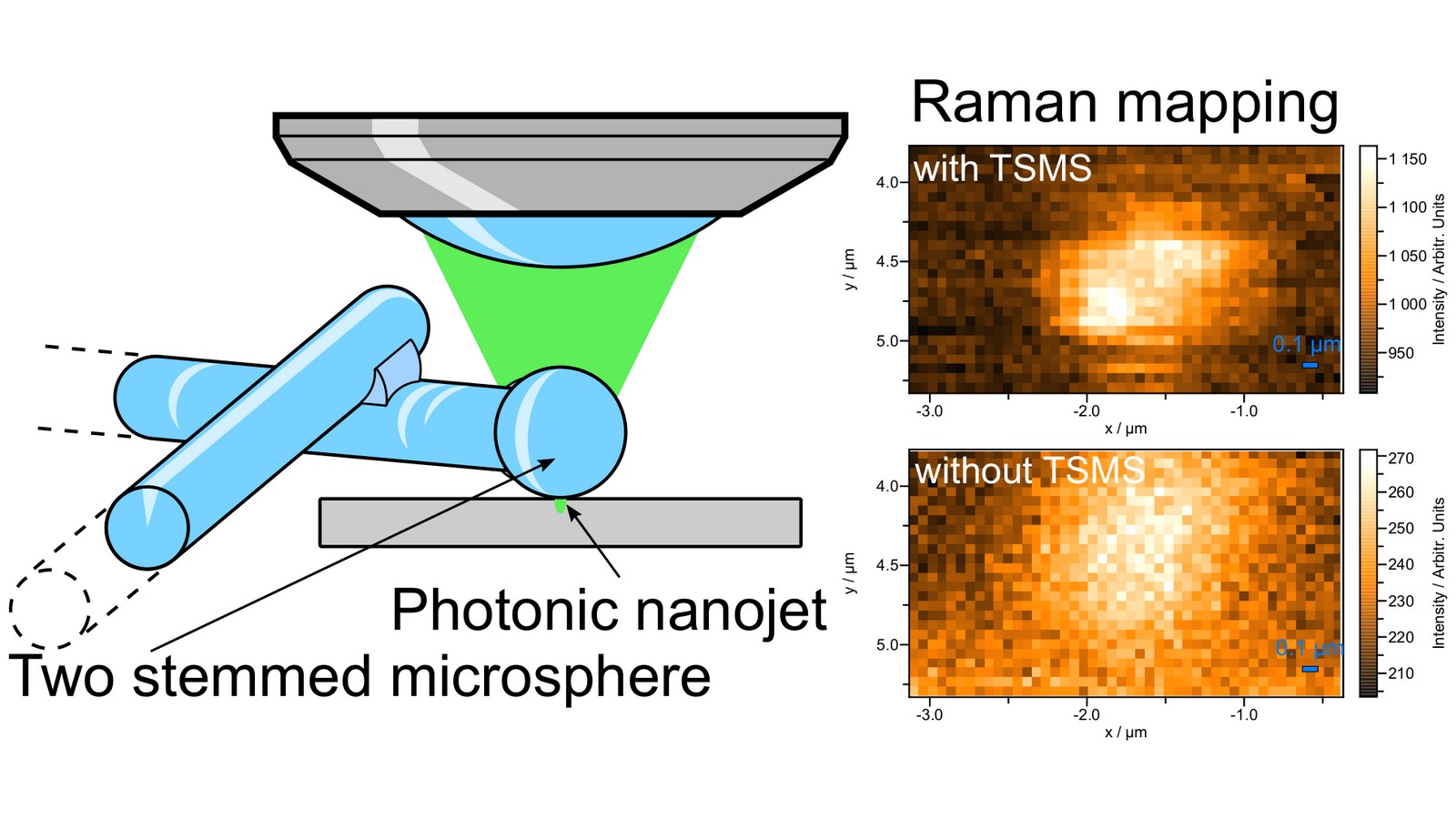 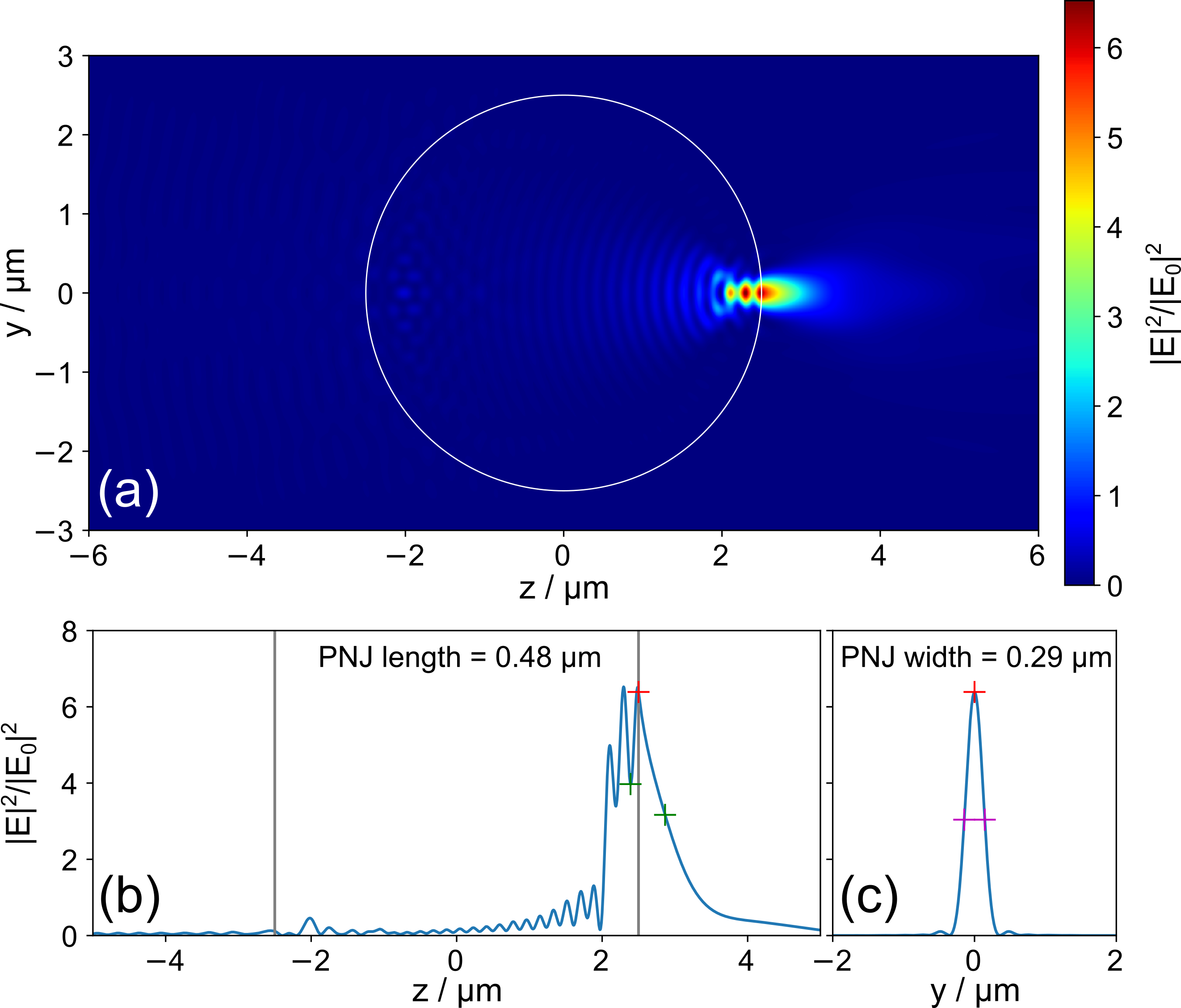 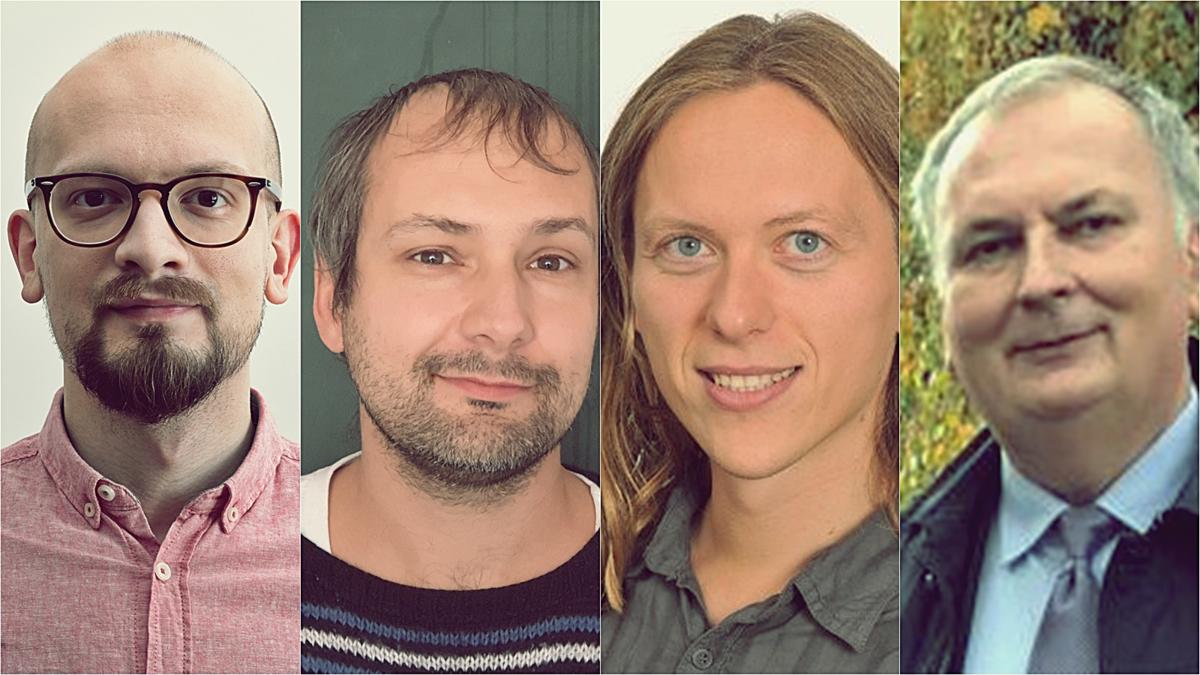 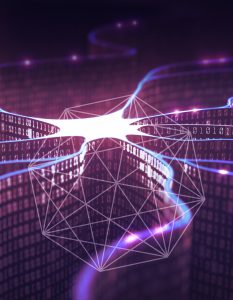 PhD student Matej Peranić won the Award for the best poster presentation at the 4-th Conference of PhD students of Faculty od Science, Zagreb. His experimental work was done in Photonics and Quantum Optics Research Unit of Center of Excellence for Advanced Materials and Sensors.

Physics student Mateja Batelić has participated on “1st Physics or Physicists (P4P) Students Conference” that was held in Skopje, North Macedonia from 3rd to 6th October. She gave a presentation about her work in Photonics and Quantum Optics Research Unit of Center of Excellence for Advanced Materials and Sensors titled “Neuronal pulse computing”.

PhD student Matej Peranić and physics student Mateja Batelić have participated on Humboldt-Kolleg conferention “Science and educational challenges facing Europe in the next decade” that was held in Zagreb on 10th and 11th October. They presented their work by posters titled Experimental generation of quantum entanglement and testing fundamentals of quantum physics and Improved circuits for a biologically-inspired random pulse computer. Their experimental work was done in Photonics and Quantum Optics Research Unit of Center of Excellence for Advanced Materials and Sensors. 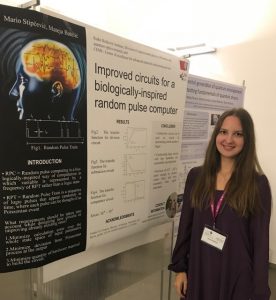 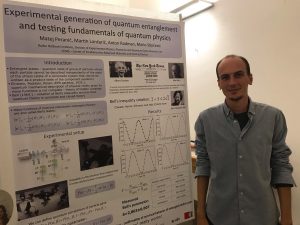 Member of Photonics and Quantum Optics Research Unit of Center of Excellence for Advanced Materials and Sensors, PhD student Matej Peranić participated on the 7th International Symposium on Optics & its applications (OPTICS-2019) that was held from 20.-24. September in Yerevan, Armenia. He was awarded with the first prize for best student oral presentation with the title The source of polarization entangled pairs of photons and testing Bell’s inequality. 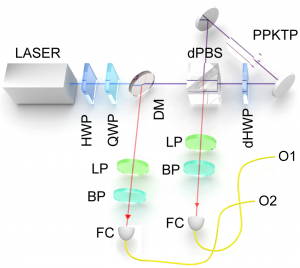 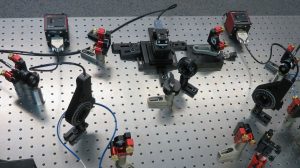 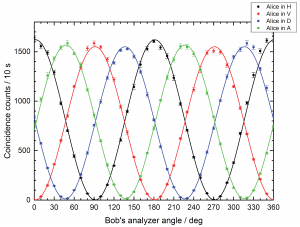