Physics of the Dark Universe Paper “KWISP: An ultra-sensitive force sensor for the Dark Energy sector”

One of the remaining puzzles in physics is the composition of the Universe. Now days we believe that it is made of about 5% ordinary matter, 25% dark matter and 70% of dark energy. Our knowledge about the nature of the dark constituents of the Universe is very feeble. They were introduced to explain some observational data. In particular the dark energy was introduced to explain the observed acceleration in the expansion rate of the Universe. One of the possible mechanisms would be the existence of a light scalar field. To render it compatible with General Relativity in the solar system and “fifth force” searches on Earth they have to be screened. One possibility is a so called “chameleon” mechanism which renders their effective mass dependent on the local matter density. In case they exist they can be produced in the Sun and detected on Earth by a suitable sensor. The detection mechanism relies on the equivalent of the radiation pressure, where solar chameleons impinge on a mobile surface and transfer momentum to it which displaces it from the equilibrium position. 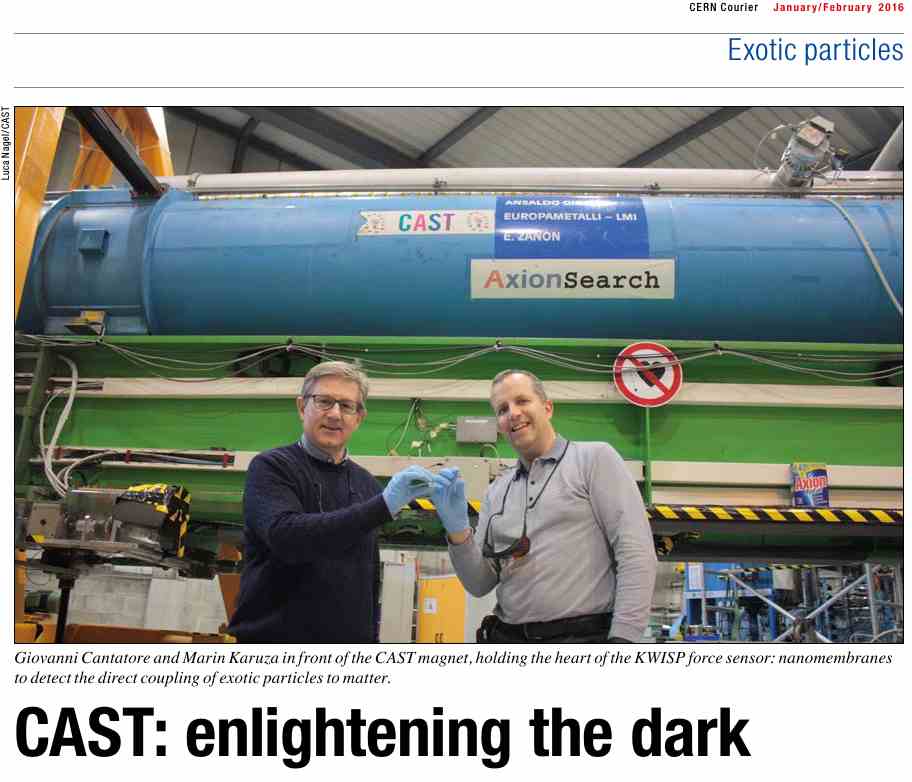 Such a sensor has been built and tested in cooperation with the optics laboratory at INFN Trieste where the sensor was situated before transferring it to the final setup at CERN which was noted in the CERN Courier article (see picture). It is based on a thin silicon nitride micro-membrane placed inside a Fabry–Perot optical cavity. By monitoring the cavity characteristic frequencies it is possible to detect the tiny membrane displacements caused by an applied force. Its application to experiments in the Dark Energy sector, such as those for Chameleon-type WISPs, is particularly attractive, as it enables a search for their direct coupling to matter. The sensitivity and the absolute force calibration are given in the article published in the journal Physics of the Dark Universe (impact factor 8.57).